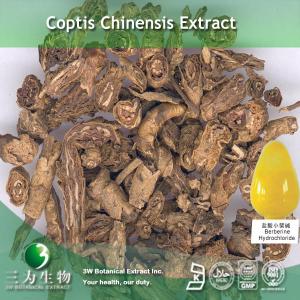 The extract is prepared from the rhizome of Coptis chinensis (huang lian), and the active ingredient is berberine, a powerful constituent with strong antibiotic effects. Also found in North American goldenseal and Oregon grape, berberine gives these pills their beautiful golden color.

Huang Lian Su has strong effects, inhibiting the bacteria that cause strep throat, pneumonia, and dysentery.

Studies conducted in China have shown it is as effective as sulfa drugs in treating dysentery, without their serious side effects. Clinical trials have also proved it effective in treating influenza, pertussis, typhoid, tuberculosis, scarlet fever, and diphtheria.

As this list of conditions illustrates, Chinese herbal medicine is highly developed and is used by practitioners to treat serious disease as well as minor ailments. This formula should not be used for diarrhea due to deficient cold conditions.

Berberine is a compound obtained from the roots, stems, and bark of such plants as barberry and Oregon grape. It is a major component of the popular herb goldenseal. Berberine has a deep yellow color and has been used as a dye, along with a long tradition of treating a wide variety of ailments.

What is Berberine hydrochloride

Berberine hydrochloride is an isoquinoline alkaloid (see Figure 1) isolated from a variety of Chinese herbs, including Coptidis rhizoma, Phellodendron chinense schneid, and Phellodendron amurense, and has diverse pharmacological actions. It has antidiabetic and antilipid peroxidation activity, as well as an anti-atherosclerotic action, and also has neuroprotective properties and improves polycystic ovary syndrome.1–5 Berberine hydrochloride is widely used as an antibacterial, antifungal, and anti-inflammatory drug, and has been used as a gastrointestinal remedy for thousands of years in China

Alzheimer’s disease – A 2007 Japanese study (Asai M, et al) concluded: “Our results indicate that berberine would be a promising candidate for the treatment of AD.”

Cancer – An April 2013 Chinese study (Cai Y, et al) reported, “the possibility that berberine may be useful as an alternative therapy for colorectal carcinoma.”

Cholesterol – A 2013 Chinese study (Dong H, et al) concluded, “berberine may have beneficial effects in the control of blood lipid levels.” It also reported no serious side effects.

Infections (bacterial, fungal, & viral) – Berberine has been shown to kill a variety of germs, and is used internally and externally. It is commonly used to treat UTI’s.

Trachoma – This is an eye infection which can cause blindness. Berberine is sometimes included as an ingredient of eye drops. WebMD lists “insufficient evidence” for this treatment.